Two men have burnt to death in the back of a car that had caught alight after a collision on the N2 just past the Mandini Toll Plaza.  “The driver of the light motor vehicle came to the paramedics and informed them that there were two of his colleagues in the backseat severely entrapped”. 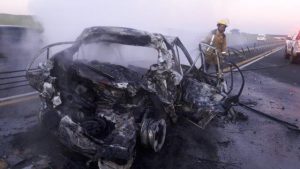 The vehicle was well alight,” he says. A call was received from Durban Metro Fire, reporting an accident on N2 near Mandeni Toll Plaza. Apparently a bystander found on the scene said a private car was parked on the N2 fast lane and one motorist driver of the Toyota Hilux came and hit the car from behind causing it to roll and catch fire,  killing two passengers ( two blue codes ) and two injured ( two green codes )
Fire fighters used hose a hose reel to extinguish the fire, extricated two blue codes, used absorbent, brooms to clean the road and then disconnected the battery from the Toyota Hilux. 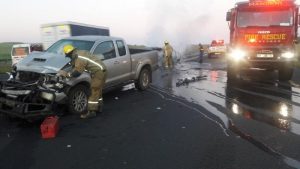